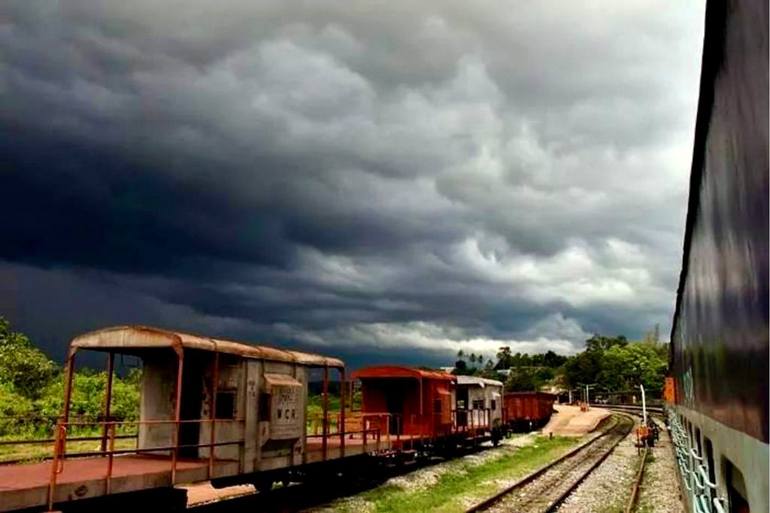 Monsoons are the best time to travel by railways in India, when nature is green, sky is blue, filled with white cotton-like clouds, temperature is mild, and humidity is high. Most of India’s rail routes are replenished with the monsoon charm. But there are some stretches, which are very picturesque in monsoon. Let us look at some of those stretches in Indian Railways where you can enjoy Indian monsoon in its full splendour.

Kasara to Igatpuri section is a part of the busy Mumbai-Jalgaon rail line, which lies in the western ghats. The western ghats receive plenty of rainfall in monsoon, and thus turns lush green. It has one of the steepest gradients in the Indian railways.

This is an amazing train route which runs at the foothills of the Himalayan range in Bhutan border. A number of small and large rivers complete their upper course and reach the plains just on that spot, creating a number of alluvial fans. The line also passes through 4 wildlife sanctuaries, where the speed limit of the trains are restricted.

Another beautiful rail line through the western ghats, this line connects Mumbai with Pune, the biggest cities of Maharashtra. The line passes through a number of waterfalls falling directly on the rail tracks, making the journey memorable. The historic Deccan Queen express passes through this section.

This scenic rail line is through the eastern ghats near the port of Vizag. The line passes through uncountable waterfalls and a large number of tunnels. The line also contains the highest broad gauge railway line currently connected to the main railway grid, Shimiliguda.

This train route between Londa Junction and Madgaon Junction passes through dense forests of the western ghats and the mighty Dudhsagar Falls. This single line diesel section is nothing less than a dream ride as the train climbs and meanders through the western ghats.

The Konkan railways was one of the most challenging railway lines built in independent India. It traverses the west coast of the country, from Roha in Maharashtra to Thokur in Karnataka. Konkan railway traverses western ghat hills, river estuaries, coastal plains and waterfalls, making it one of the most popular routes to travel in the monsoon.

This is another rail line passing through the western ghats, which comprises virgin forests and big waterfalls. This single line diesel route is also very popular among locals and tourists alike. If you travel during the monsoon, you will find an uncountable number of small and big waterfalls and hillside streams have come alive replenished by the fresh rains.

This railway line traverses the northern bank of the Brahmaputra. The train passes over several small and big rivers, which get down from the mountains and drain into the Brahmaputra. It is a good example of how beautiful plains can be during the monsoon.

Tourist trains are a new entity in Indian Railways, though rail fans have always travelled in the normal passenger trains. Vistadome coach is one of the latest additions to the Indian Railways, which attracts tourists from all over the country. Special trains for tourists are important to sustain revenue generation in the tourism sector, as many of the lines pass through sparsely populated regions, where passenger traffic is low. Also, we need to make sure the hype of the new trains reaches the masses, so that more and more people travel in these routes during the monsoon, which is the off-season for most tourist places.