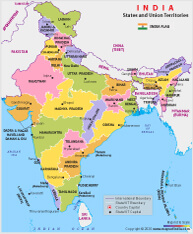 The Issue with Distorted Maps of India

We all know how India looks. It is very easy to point out India wherever it appears, such as on websites, documents, pages, information bulletins, apps, media, posters, and where not. Despite everything known and can be achieved beforehand, we do see distorted maps of India. How and why do people distort India’s map? Well, the answer is, all of us don’t agree with how India looks.

The distorted maps of India also have a number of varieties. Some don’t show Jammu and Kashmir fully within India. Others show a shaded region in Jammu and Kashmir, and Ladakh, which is an integral part of India, but due to border disputes, have been occupied by Pakistan and China. Maps in China also show Arunachal Pradesh, an important state in India, to be a part of China.

Legally, the entire erstwhile Jammu and Kashmir state, including parts occupied by Pakistan and China, are an integral part of Indian territory. But still, there is also a disputed version of the map, showing those parts as a part of Pakistan and China respectively, as they are the lords of the land at present. The disputed version of the map should never be published anywhere officially as it violates India’s sovereignty. Unfortunately, the map does crop up here and there. Those having the correct knowledge of the map then have to correct it back.

As far as the Arunachal Pradesh part is concerned, it usually doesn’t come up outside China. But there have been instances historically where the state was excluded from the borders of India. There are also maps, distorted deliberately to the extreme, which show the whole erstwhile state of Jammu and Kashmir to be outside India, either an independent nation or a part of Pakistan.

We Indians strongly condemn the use of distorted maps anywhere, especially in official areas. We have strongly condemned false and misleading acts done by Pakistan and China to deliberately alter the borders of our country by force. There may be personal views of different people but the re,ality can not be changed. The whole of Jammu and Kashmir, Ladakh and Arunachal Pradesh are part of India, and hence, every time a disputed map pops up, we will protest and order the correct map to be put in its place.

Check out our Instagram page here, where we have strongly opposed the use of incorrect maps by the WordPress app and Blogger website. We hope the mistake will be acknowledged and corrected from the respective company’s end.

One thought on “The Issue with Distorted Maps of India”