Places in India to Witness the Advent of Spring 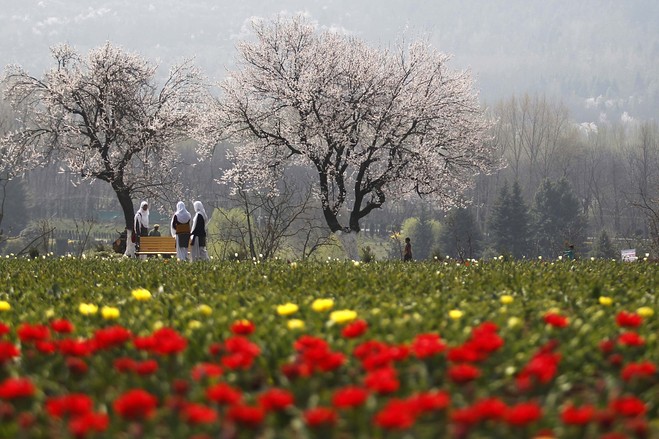 Spring season is welcomed in India with a seasonal festival. Spring marks the end of the harsh, cold winter, and the beginning of a warm sunny summer. Spring is the time, when the trees are filled with new leaves and flowers. Viewing blossoms is viewed as an important festival in many parts of the world, the most notable among which is cherry blossom in Japan. Though we have followed Japan and started some kind of festival in big cities, we always have cherished our own spring blossoms. Let us now look at a few places in India where we can witness trees in full bloom at the advent of spring.

No doubt the Vale of Kashmir has to be in the list. Kashmir is situated in the northernmost part of India, where winters are harsh. Hence, the advent of spring is viewed as an important festival by the Kashmiris. The almond trees first burst into blossoms, followed by apple, cherry, and chestnut. The Tulip Garden of Srinagar gets filled with thousands of tulips at this time. It, along with other Mughal Gardens, attract tourists from all over the country and abroad.

Sikkim is the least populated state in India, but is one of the most diversifying ecological hotspots in the country. Rhododendron and orchids cover up the hilly state at the advent of spring. The Yumthang valley of North Sikkim burst into flowering at this time, and it is thus popularly known as the Valley of Flowers. As the weather remains pleasant during this time, with little rainfall, tourists throng in thousands to this wonderful little state of India to witness spring at its full grandeur.

Tucked away in the western corner of West Bengal, the splendour of Purulia is best witnessed during spring, when the Palash trees are full of orange-red, flame-like flowers. With development of tourism in Purulia in recent years, tourists have started visiting remotest parts of Bengal villages, to witness the advent of spring. Rabindranath Tagore, during his stay at Shantiniketan, liked the Palash bloom in the area, and gave rise to Basanta Utsav in Shantiniketan.

In the cold desert landscape of Ladakh, we have the apricot blossom in spring. In Leh and Kargil regions, winter snow makes way for apricot trees to burst into blossoms as the temperatures turn less harsh during spring. Though the locals have enjoyed apricot blossoms for centuries, Ladakh is a bit cut off from the rest of India due to snow in high mountain passes along the route. Leh is however, connected to Delhi via flight services, thus helping tourists reach there and witness the landscape of pink and white apricot flowers in the midst of brown hills and blue skies.

Giant Himalayan Lily, a flowering plant with huge flowers bloom at the advent of spring in the north-eastern Indian state of Manipur. Small villages like Liyai Khullen village in Senapati district are filled with majestic blooms of these giant flowers in late spring. Though Manipur is an off-beat tourist spot in India, nevertheless, the state has much to offer, and if we have some festival like that of cherry blossoms in Meghalaya, we will surely see a large influx of tourists in this quiet, picturesque state.

Have you witnessed any of these blossoms? Let us know in the comment section below.