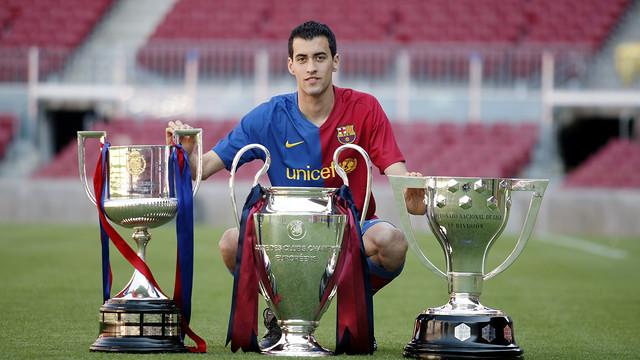 When Barcelona’s recent success comes into our mind we think of Messi, Xavi, Iniesta, Puyol and Valdes. There’s another player who is rarely spoken about that should receive equal praise in relation to how Barcelona perform. He’s none other than Sergio Busquets. He’s not only a vital cog for FC Barcelona but also for Spain national team. With 33 trophies to his name, he made his debut in 2008 and has always been a regular starter for Barca and Spain. The Catalan midfielder is arguably one of the most underrated players in the world and deserves much credit from fans, media, and pundits. Let’s see how Busquets is the unsung hero of FC Barcelona.

After Euro 2008, Busquets became the successor of Marco Senna for La Roja. Spain went on to win the World Cup 2010 and Euro 2012. Pep Guardiola who coached Barca had preferred Busquets over Yaya Toure and Seydou Keita who were forced to be on the bench and left the team due to lack of playtime. In 2010, Barcelona bought Javier Mascherano who played in a similar position as Sergio Busquets. As challenges mounted up Busquets never looked back. He upped his game even more which forced Barcelona to play Mascherano in the centre back position. Although Mascherano had more experience in the CDM position he never played as a centre back before.


Vicente Del Bosque once opined “You watch the game, you don’t see Busquets. You watch Busquets, you see the whole game”

Busquets reads the game as no one else does. He’s a player who can decide games for Blaugrana. He knows what to do and hardly commits a mistake. He is one of those players who create an impact on the game with or without the ball. With the ball, he makes what is difficult look easy. He disposes of the ball with one or two touches. Without the ball, he gives us a lesson of being in the right place to intercept and running just to recover the ball. Busquets plays the CDM role which is the toughest position to play in football. He is the salt to a dish called FC Barcelona. He brings control and security which is pivotal for Barca’s tactical plan. He has the ability to cover the defence, intercept the balls quickly from the opposition and convert it to counter-attack. Hence he is nicknamed Octopus.

Busquets doesn’t only contribute to the defence but he has a great vision and passing ability too. He knows when to pass and where to pass. Sergio has no problems bringing the ball up and setting up the offence. Many times it’s his passes that lead to goals. He has a great passing accuracy of around 90 per cent in almost every game. Sergio Busquets plays as a pivot for Barcelona and Spain. He is a silent guardian who gets the tasks done easily. He seldom scores or provides assists. What makes him so unique? His ability to read the game very well, intercept the ball quickly from the opposition, control the game, create chances and excellent positioning awareness. If you remove this pillar from the squad, the team collapses like a house of cards. That’s how vital Busquets have become for Blaugrana over the years and he’s one of the best players to don the Barca colours.